Another big search algorithm seems to have been rolled out by Google recently. While updates happen semi-regularly the changes made are typically fairly small. This recent update, however, is an update to the core of Google’s search algorithm and as such, the search engine results page has seen a few changes. So, what could the algorithm update mean to you?

A number of websites have been hit by these updates and to find out if you have seen any changes you should check your, new and updated, Search Console. At the moment changes are still ongoing and the real results will take a while to show themselves on the SERP. Early movers have been wikipedia.org, who have seen a 24% drop in visibility, while education.com and askmen.com have seen 30% bumps in their visibility. So, if your site is affected, changes could be significant. If you really want some detail on the recent changes you can check out this update on the Google blog. But be warned, you might need a cup of coffee first.

Another change Google has made that is sparking some debate is to do with some of the basic inbuilt functions Google offer on google.com. If you type “what is the time in X” into Google you will be provided with the answer directly from Google. Previously the SERP would also display a number of links below Google’s answer. But now if you carry out the search, all you see is Google’s answer. 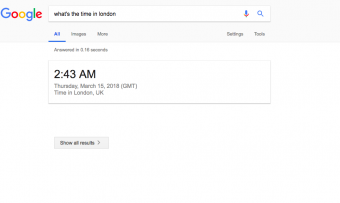 As you can see, it is still possible to see the other search results, but to do so you need to click. Google’s rationale behind this decision is that the majority of searchers when making this search, never click anything. So why slow down the SERP by giving them extra information that isn’t being used. As always, with any change Google makes, a large amount of the SEO community is outraged, but for now, at least this seems like a fairly logical decision for Google to make. Time isn’t the only thing affected, but their conversions app and their built-in calculator will also display the same way.

Change (an Algorithm Update) is as Good as a Rest

What do you think about Google’s latest SERP changes? Are you expecting to see your site’s ranking increase or decrease? Do you think Google hiding search results when people search for the time is scandalous?