You are here: Home / SEO / Google’s War on Intrusive Interstitials

Google hinted that they will punish websites with intrusive interstitials as part of their continuing drive to make the everything on the web mobile friendly. You know “interstitials” as pop-ups or anything that blocks you from navigating from one page to another. If you read articles on Forbes, for example, you often have to wait until a thought of the day or ad completes before you can proceed to a page. Come January 2017 Google will dole out SEO penalties to sites using interstitials on mobile web pages.

The original post was published in August 2016 and we have a confirmed update on the intrusive interstitials penalty. Google official said that the penalty went live on January 10, 2017. True to their word, they warned Webmasters that the penalty would rollout in January. Once we have more concrete data, we’ll update this again.

What are Intrusive Interstitials?

First things first. Here’s a complete definition of an interstitial:

An interstitial is any popup or CTA that stops a user using a page until a certain action is taken. One example would be a beer website, asking your DOB before you can continue. Another popular one at the moment used on content marketing websites is a popup that fills the entire screen and asks something amusingly provocative like “Do you want your customers to hate your blog”. For you to access the page, you need to take some kind of action. Either clicking on the X, answering the question, providing an email/contact info, etc.

The reason Google doesn’t like these kinds of popups is that they do not always translate well on mobile devices. The popup, while easy enough to navigate around on a desktop, can seriously hinder a website’s usability on a mobile device without a mouse and with a smaller screen.

Not All Interstitials Are Created Equal

However, not all interstitials will be hit with the penalty. Google acknowledges that some are legitimate (for 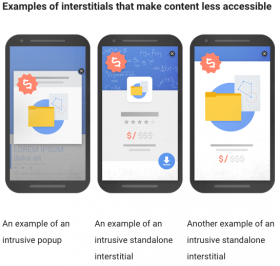 example the beer situation mentioned above). Here are some types that will be excluded from penalties:

So, if you think your site is using an intrusive interstitial, you have until January 10th 2017 to either turn it off or tone it down to something that Google thinks is “reasonable.”

While we’re on the subject of pop-ups, this may be a good time to look at your settings? If they occur too fast or too often, you may be seriously annoying your audience. While pop-ups may improve conversion rates, done improperly could be driving away your visitors.